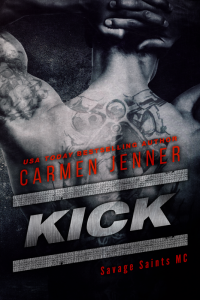 When I was ten, my father indoctrinated me into the family.

A brotherhood who would fight, protect, and give their lives for one another. A club whose ties ran thicker than blood, murkier than the dirt and grime that tainted my soul. Stronger than the bonds that connected me to my own family.

A band of brothers, where loyalty was kept and paid in a currency of blood.

When I was twenty-seven, I betrayed that brotherhood.

I’ve spent every day since running, avoiding paying back that debt.

My name is Daniel Johnson.  I have betrayed everyone I ever loved.

And I’ll betray her too.

This is my story—if you’re screwed up enough to want to read it.

Warning: KICK contains graphic violence, profanity, drug use, and explicit sexual situations of a taboo nature. Intended for an 18+ audience only. Not intended for pussies.

The darkness of a hollow and binding novel that is raw and primal in it’s build and despaired evil of a cruel world is the incandescent waver of Kick by Carmen Jenner. MC. Motorcycle Club. The blood on the hands of loyalty and the reigns of a darkness breathing down your neck is raw and real in the weakness of pain and in the strength of fight in a truly unimaginable story that will leave you grasping, electrified and with a heart ache of sympathy. MC Books are very hit and miss for me; some I love some I am not fond of but Jenner’s latest release has me in a world of dismantlement.

Kick runs a ramped beat to the souls of MC novels, where it’s dark, it’s agonising and the bad-boy spurious makes for a revulsion of power throughout the novel. Daniel (Kick) lived, breathed and had always been an MC brat; it’s in his DNA to reign the loyalties to the Prez and the belief that women are expendable in the business if it satisfies a need. Tormented by the past and heartache still real of the surface Kick’s demeanour was very much the alpha-male with the notion that restraints on life leave nothing to lose and have made for am “I can do what I want” vibe from the alpha male!

Ripped raw from the solitude of the daring MC novels these days Jenner delve deep into a criminal sanction of crime, drugs and sex. The details were sometimes graphic, the pain was very real and in the agony of the hearted characters I really felt that Jenner heaved a bewilderment of strength and choices in her writing.

The narrative broke a barrier of MC novels I haven’t witnessed that brought a concave of so many emotions; hurt, pain, anger and loss all skirting in the relationship that is formed the creation of a bond between Indie and Daniel.

The demeanour of light in darkness, finding strength after weakness very much plays to the strengths of the character Indie; the brutality of events and the imploding bound of her situation simultaneously was a coax of agony and her strength within the novel.

Kick toned a survival theme throughout the novel where as dark and desolated the binding chains of the motorcycle gangs predominately took place bringing forward challenges and the loyalty of the MC. It’s not a light book, it’s one you need to have a shot of tequila and sit in a dark room reading (which I totally did … sans the tequila). Although this is a very dark read; the highlighting sliver of light intertwined within the novel was the plait of strength and redemption possibly.

Carmen Jenner buffed a new wave of love to MC novels as a reader for me personally. I was in a total readers block until I read Kick and it deeply effected the knots and bolts of feelings after I finished the book. The fervent relationship of weakness and strength powered within the novel was a dark mortality of the MC lifestyle and Jenner’s words bewilder an unequivocal reckoning that left me in awe. 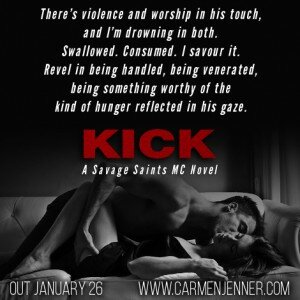 I take a deep shuddering breath, close my eyes and stretch my hand towards him. His touch is gentle this time, far more gentle than I’d ever thought someone with so much uncontained violence to him could be.

“Spread your fingers,” he commands. I do, and he lifts the roll of tape, presses the edge to my skin and begins winding it over my knuckles. I close my eyes. The strident sound of it stretching out from the roll makes me want to flee. It makes me want to run as far from his touch—from any man’s touch—as I can possibly get.

The feel of the tape against my flesh, binding, holding, is so much worse. I tug on my hand, but he won’t let go. My heartrate skyrockets, and sweat beads erupt over my brow and upper lip. I’m in that room again, struggling, screaming, trying to fight them off, and failing.

Biker knows it, too. His dark eyes challenge, they dare me to run, but they also implore me to stay. It’s ironic that the only thing keeping me here, keeping me grounded, is the man who abducted me.

He holds my gaze. I don’t know exactly what is hidden in his dark blue one, but it suffocates the panic within me, douses it like water flooding flames. He bends his head to my hand. Taking the paper tape in his mouth, he rips it with his teeth.

I still. I soften. His gaze doesn’t leave mine, not even once. Not even when he starts in on my wrist, gently biting through each piece of tape before pressing it down with his rough hands. I’m mesmerised by his mouth, the piercing, and the soft, full lips. The light catches a silver chain around his neck, something I’ve never noticed before—but then I try not to make a habit of staring too closely at him. Not now, though. Now I watch every twitch, every blink, every intake of breath, and every inch that is swallowed up by his mouth moving closer to my flesh. 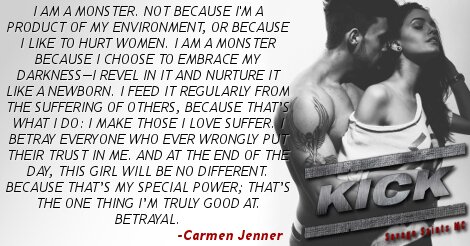 Carmen Jenner is a thirty-something, USA TODAY Best Selling Author, doctor, pilot and CIA agent.  She’s also a compulsive, flagrant prevaricator who gets to make things up for a living.

While Sugartown may not technically exist, Carmen grew up in a small Australian town just like it, and just like her characters, she always longed for something more. They didn’t have an Elijah Cade, though.

If they did, you can be sure she would have never left.

Thank you to ‘The Rockstars of Romance Promotions‘ for allowing me to review for the Blog Tour. 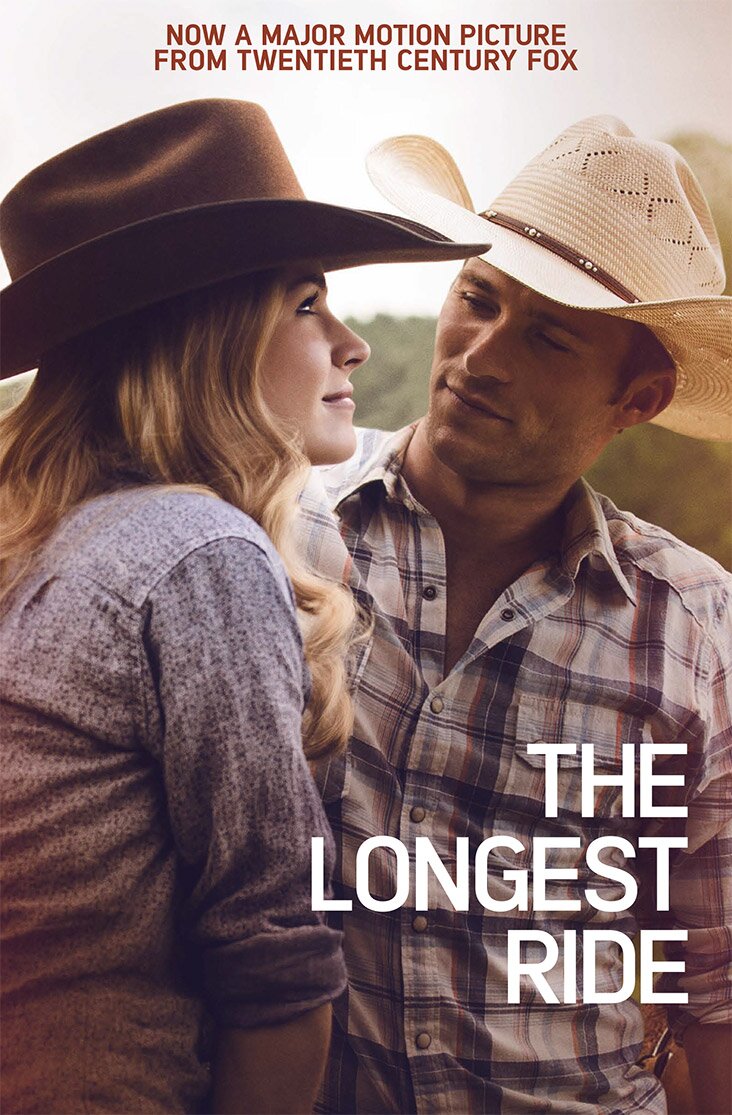 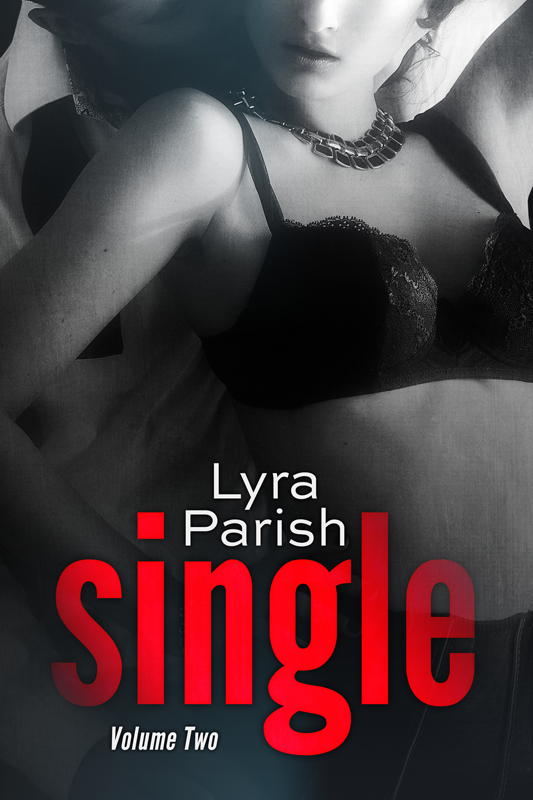 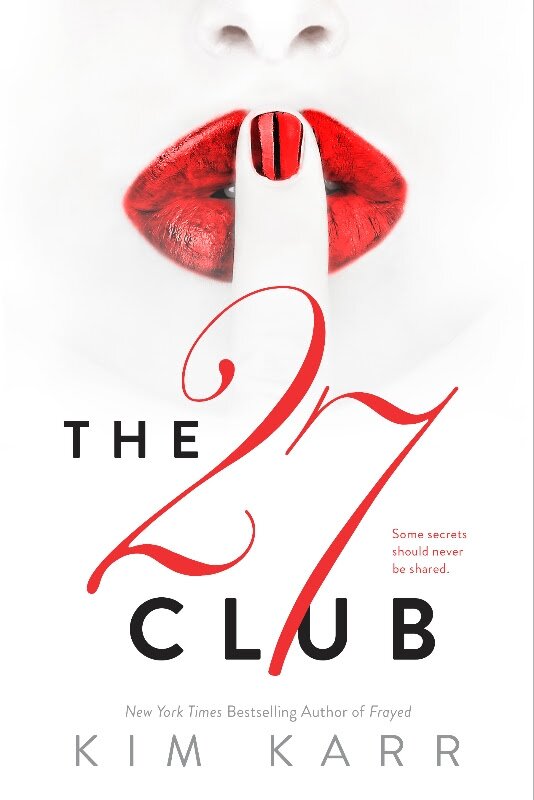 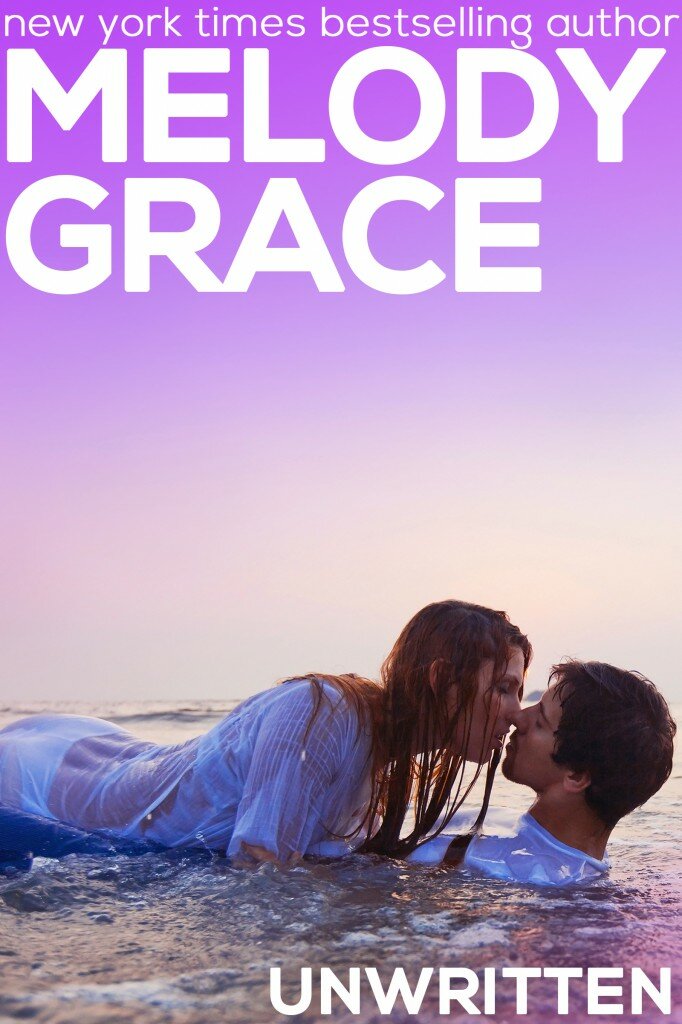 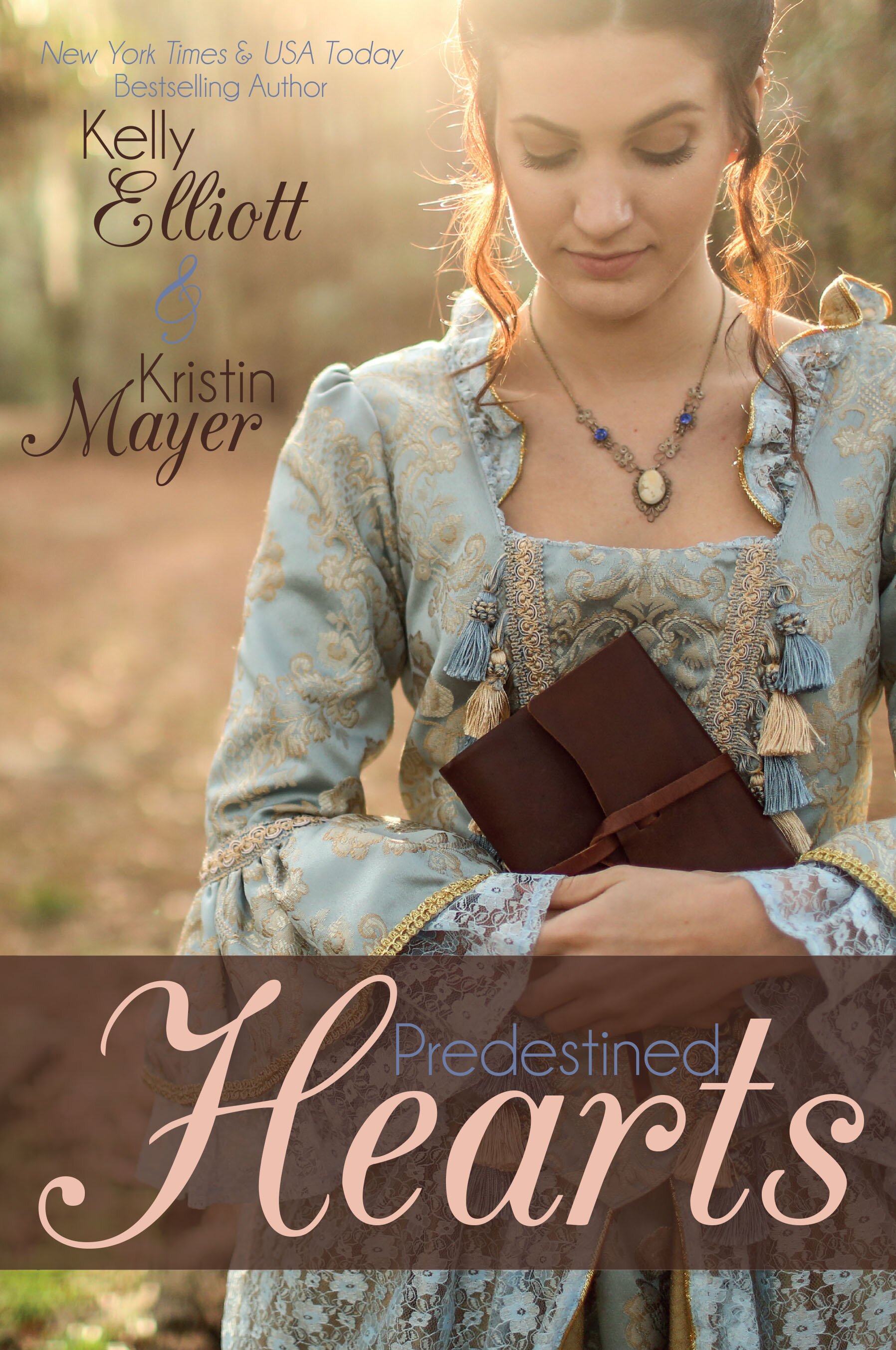 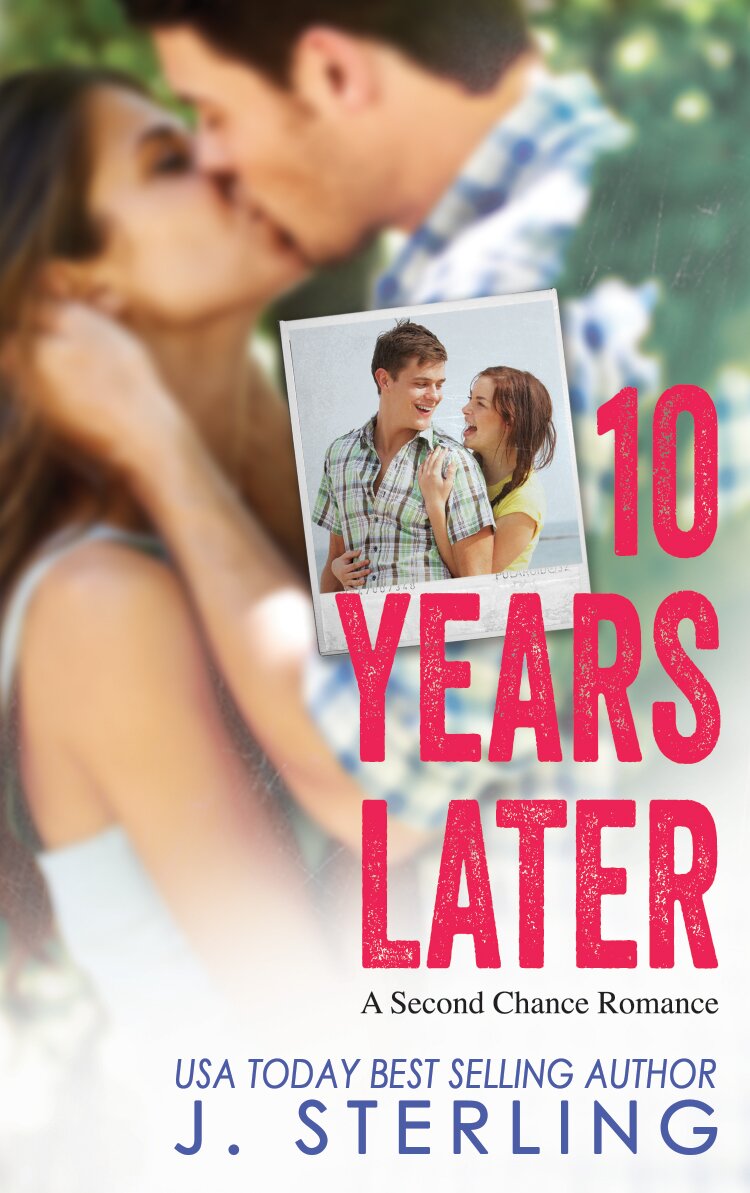 I have reviewed 24 books so far this year.